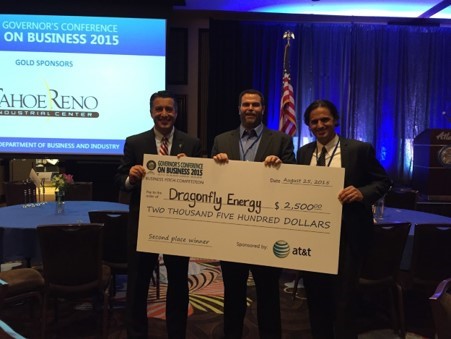 Dragonfly Energy first took flight in 2013 during founders Denis Phares’ and Sean Nichols’ time in graduate school. Both attended the University of Nevada, Reno, and participated in its executive MBA program as members of the 2012 cohort. With extensive backgrounds in the energy storage sector, both Denis and Sean shared a mutual frustration with the industry’s research and technology. The antiquated technology behind lead-acid batteries hasn’t made any groundbreaking advancements since the technology was first developed— which is why lithium and its ever-evolving processes are gaining in popularity.

Denis left a tenured career at the Aerospace and Mechanical Engineering department at the University of Southern California to start a business and improve the battery technology field. He has a background in chemical and environmental engineering along with physics and began studying particles released into the air when fossil fuels are burned. Before meeting Sean, he conducted his own research on the particles while using paint guns in the garage. With a background in music and time spent in college playing in a band, Denis hoped to create battery-powered guitar amps.

Sean was simultaneously working as the Vice President of Sales and Operations at AIMS Power, an inverter company while obtaining his MBA. He knew the industry inside and out and noticed it was seriously lacking in the deep cycle battery sector for RVs and other rigs.

During their time in the MBA program, the two would tutor each other: Denis would help Sean with accounting and finance, while Sean helped Denis in their marketing and social media courses. Denis brought on three additional partners who helped the company in its early phases.

Their first successful run in the realm of entrepreneurship competitions was their time in the University’s Sontag program. With these competitions, Denis oversaw developing the business plan and delivered the company’s 90-second elevator pitch. In this plan, they highlighted the process to streamline the manufacturing of these batteries to reduce the production costs by 50 percent. The outline was to sell lithium-ion batteries for RVs and other travel rigs, significantly fund the research and development to do so, and change energy storage for the greater good.

These ambitious goals earned them second place in the Nevada Governor’s Cup. The competition is currently the state’s only collegiate business plan program where students from Nevada’s universities and colleges can compete for prize money.

Energized by that win, the team received top recognition at the graduate level in 2014 as the first group from Nevada to win at the Donald W. Reynolds Tri-State Governor’s Cup. That same year, they were a finalist in the Clean Tech Open, a California based competition for funding the most technically advanced, environmentally focused startups.

Their first battery was imported from China and proved to be a learning experience with how to make a proper battery pack. Always looking for improvement, Denis and Sean immediately worked to build better batteries in Denis’ garage, making the first prototype of the BB10012 in 2015.

The battery prototypes were branded with Dragonfly Energy until Sean coined the name “Battle Born Batteries” at the Nevada Governor’s Conference in mid-2015. As the company’s consumer brand, those bright blue batteries you know and love slowly began inching their way into the industry.

In 2016, the company attracted the attention of Dynavolt Renewable Power Technology, which was enough for the publicly traded Chinese company to invest $2 million in the startup. Denis showed the Dynavolt executives the battery manufacturing and testing process in the lobby of his wife’s travel vaccine clinic at their home!

The well-managed funds, combined with Sean’s success with sales, led to rapid expansion in the research and development sector of the company and its manufacturing capacities. Prototypes of the GC2, the 6-volt golf cart battery drop-in replacement were refined as well. The team moved into its first office at Longley Lane in Reno where it first began producing batteries on a larger scale and eventually burst at the seams from the amount of demand!

Riding the successful wave of momentum, Dragonfly Energy focused heavily on expanding the team, marketing, and production efforts, and attended their first trade show in Miami in 2017. The company has taken on brand partners to represent the products during their travels across the country and beyond. The financial projections created during their experience in the business competitions closely matched actual projections and is something that Denis and Sean take pride in today.

After all this growth, Dragonfly Energy’s goal is still the same: reducing the cost of lithium and bringing customers efficient and green renewable energy storage. As the company produces more technology and leads the way for lithium, it still holds true to its original values.

Interested in purchasing our batteries? Check out Battle Born Batteries.